A few months back Jedward announced they would be offering their critically acclaimed fourth album, ‘Voice Of A Rebel’ on CD. The response to the initial round of CDs, intended for a limited run, was brilliant, and so John and Edward have revealed another exciting offer.

In addition to the already available CD, now in its second wave of release, fans can buy a signed copy, and if that wasn’t enough, they’re accompanied by two Polaroids, exclusive and unique, “Taken just for you.”

Full details here. You can still buy the unsigned edition of ‘Voice Of A Rebel’ here. 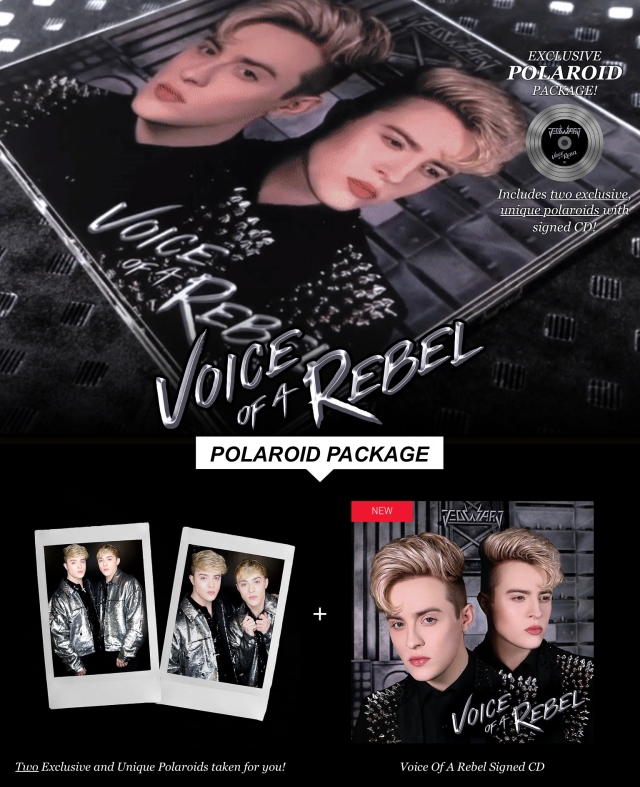 Billie Eilish debuted, ‘No Time To Die’, the new theme song for the latest James Bond film of the same name, at the BRIT Awards last week. Co-written by Billie and her brother Finneas, it also legendary composer Hans Zimmer’s first Bond theme. Now John Grimes of Jedward has released a gorgeous acoustic cover of the song, available on the JedwardTV YouTube channel.

First uploaded to the @planetjedward Twitter account, John later said on Instagram Live that the cover was done in two takes, and recorded straight to his phone, with no post-editing or studio mics. Accompanied only by his Gibson guitar, John’s cover is a perfect showcase for his vocal talent, which in addition to singing in his own tone, also involved falsetto, and high notes which he reached with ease.

Listen to John’s cover of ‘No Time To Die’ – let us know what you think!

Jedward recently announced the dates for their U.K. tour, to take place in May. Further details can be found on their  official website.

John Grimes from Irish duo Jedward has long shared his acoustic guitar talents with the world, making his playing a part of their live show, as well as on their social media. Today he has uploaded onto the @planetjedward Twitter account a very special rendition of Lewis Capaldi’s song, ‘Before You Go’, which the Scottish released late last year.

Uploaded unedited, John is facing the camera while playing his Gibson guitar. The clip has been shot directly to camera, with no post-editing: we hear his guitar and sweet voice without the benefit of studio interference. Passionate, heartfelt, and absolutely gorgeous.

Listen to John and ‘Before You Go’:

Jedward recently announced the dates for their U.K. tour, to take place in May. Further details can be found on their  official website.

Posting a mysterious countdown last night on their Instagram story, Jedward today confirmed what fans had been waiting for – dates and venues for their new UK tour, this coming May.

The Dublin twins offered VIP upgrades, which include a one of a kind meet and greet for all of the dates. The VIP upgrades – sold separately to the tickets – went on sale at 1.25pm GMT, and have been completely sold out within the hour. Tickets for the concerts go on sale at 9am, Monday 17 February, through Ticketweb, Eventim, and Skiddle. See Jedward’s official website for further information.

Jedward released their fourth album, ‘Voice Of A Rebel’, which they entirely wrote and produced, in June last year, following their signing of a new 5 year contract with Universal Music Singapore. You can stream and download it here, and buy it on CD here. They have been working on music for their as yet un-named fifth album.

‘Voice Of A Rebel’, the fourth album from Jedward, and the first to be completely written and produced by the Dublin duo, was released digitally through Universal Music Singapore on June 27. Now, just in time for Christmas, the album has been given a CD release, with pre-orders scheduled for delivery from 16 December.

‘Voice Of A Rebel’, released in June, was the first album to be completely written and produced by Jedward.

The CD, which has been designed and created by John and Edward themselves, is presented in a 6-panel digipak case, which contains a 20 page lyric book, along with the vinyl look CD.

Already an incredible album, the physical copy is a high quality production, worthy of treasuring by both fan and casual listener alike.

It’s been a whole decade since Dublin twins John and Edward, known professionally as Jedward, first strode onto the stage in Season 6 of the UK reality tv show, X Factor.

Jedward are still going strong a decade down the track, and released their fourth album, ‘Voice Of A Rebel’, in June this year, after signing a 5 year recording contract with Universal Music Singapore.

Considering just how many people have auditioned for X Factor, it’s testament to John and Edward’s incredible talent, and sheer determination, that they’re not only still doing well ten years along, but are also still ranked in the top 5 most financially successful acts to come out of the show, which first started in 2004. Just think about how many acts have come and gone in that time…

They’re the living example of the lyrics from one of their songs, ‘Respect Your Dreams’:

Respect your dreams
Go live your life
Don’t write yourself off
Put up a fight.

Even better are these lines in album title track,  ‘Voice Of A Rebel’,

Yeah, the truth it lingers in our bones
Oh, we know our worth that’s why we’re fighting on
Yeah, they’ll never tell us who we’re gonna be
Oh, we’re marching on to our own beat

There’s absolutely no stopping Jedward, who will be performing this Saturday at the Sunshine Festival, in Upton-Upon-Severn. They’re also going to be singing next weekend at the Gibraltar Fair, the first time the duo will have visited the rocky British Overseas Territory.

Today Jedward commemorated their 10th anniversary with a beautiful acoustic cover by John of the title track from Taylor Swift’s upcoming album, ‘Lover’. Check it out here:

‘Voice Of A Rebel’ Out Now!

The much anticipated 4th studio album from Jedward, ‘Voice Of A Rebel’, is now available to download and stream.

‘Voice Of A Rebel’ is a beautifully written masterpiece of 22 glorious anthems, all written and produced by John and Edward themselves.

The album is upbeat, positive, inspiring, and full of passion. Authentic and relatable, ‘Voice Of Rebel’ shows Jedward as mature and extremely talented artists.

Details of where to download and stream ‘Voice Of A Rebel’ in the link below:

Jedward have just announced that first single from upcoming fourth album, ‘Voice Of A Rebel’, entitled ‘Soul Crushing’ will be released to download and stream, across Asia from June 6th, then worldwide from 13th June.

New album ‘Voice Of A Rebel’ will be released worldwide on June 27. The twins also announced the track list from the album, which consists of 22 self penned songs.

16. Born To Touch Your Heart

17. Running With The Angels

19. Heroes Of The Future

20. Choose Your Own Adventure

In speaking to RTe in April, John and Edward said,

Soul Crushing is a heartbreak song

‘Voice Of A Rebel’ is the fourth album for the Dublin duo, and the first under their new record deal with Universal Music Asia.

Some titles such as ‘Phoenix Wings’, and ‘Bodies In Action’ have previously been released, while the Twins revealed during their recent UK tour that good friend Ed Sheeran’s favourite track was called ‘Spice Things Up’. John and Edward also previewed several tracks on tour.

‘Voice Of A Rebel’ will be available to stream and download worldwide from June 27.

2019 marks #10YearsOfJedward: 10 years since the identical twins from Dublin, Ireland, first leapt into the public consciousness with their appearance on The X Factor. They commemorate it with the release of their long-awaited fourth album, the name of which, and artwork, has been revealed today.

The pair fought a hard-earned battle through to the finals, finishing in 6th place in 2009. They’ve since gone on to release 3 albums and 12 non-album singles, as well as making countless television appearances, including hosting several series of their own. They’ve had cameos in 4 films, and represented Ireland twice at the Eurovision Song Contest, with their 2011 8th place still the highest position for Ireland since 2000 – making it effectively their country’s best result this century.

Using their official Twitter account, @planetjedward, Jedward have today revealed the title and cover artwork of their long-awaited fourth album:

Jedward Voice of a Rebel
The New Album
Summer 2019 pic.twitter.com/sHn9scPqw9

Jedward, real names John and Edward Grimes, will release ‘Voice Of A Rebel’ this summer. They will be appearing on ITVs ‘Loose Women’ today.

Recorded in Los Angeles over the past 18 months, it’s the first album of songs entirely written and produced by the duo themselves. John and Edward also have complete creative control over the release, artwork, styling, and videos. Since becoming independent artists in 2013 they have released 12 non-album singles, starting with ‘Free Spirit’ in 2014. Their most recent release was ‘Golden Years’, in November last year.

Jedward will be touring the U.K. next month with two dates in each of Manchester’s historic Factory, the Camden Assembly in London, and Glasgow’s Garage. Tickets are available here.

Two time Eurovision finalists Jedward will also be performing at The Sunshine Festival in August. Tickets and further information here.

Jedward have today announced they will be performing 6 UK concert dates this May. Further dates, including the possibility of Dublin shows, are yet to be confirmed.

Jedward, real names John and Edward Grimes, will also be releasing their fourth album. As yet the name has not been released, but a series of tweets from the Dublin twins suggested that there are at least 16, possibly more, tracks on the album. All have been written and produced by John and Edward.

The concerts will be between May 10 and 16 inclusive, with two dates in each of Manchester, London, and Glasgow. Dublin dates are as not yet confirmed.

Tickets go on sale next Friday, 15 March, at 9am, and will be available from Ticketweb.

Jedward have released no fewer than 12 singles since 2014, all of which have are self-penned. The May tour will be the first time the pair have performed headline shows in the UK since their 25th birthday concert, at London’s O2 Academy, Islington, in 2016.

Jedward most recently released a series of three songs, ‘Perfect Wonderland‘, ‘Karma‘, and ‘Golden Years‘, back in November last year.

Back in January Jedward had Eurovision fans excited when they tweeted:

May is gonna be JEPIC

With the announcement of concerts and the new album, May is most definitely going to be JEPIC!