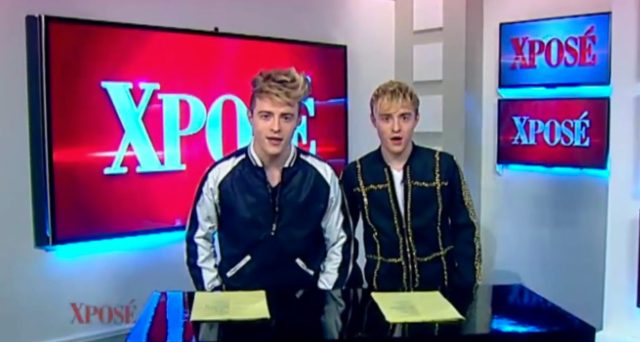 John told host Peter O’Riordan that NBC (Syfy is owned by NBCUniversal Cable division of NBCUniversal) approached them to record a song for the Sharknado 3, because they liked the lyrical content of their previous song, ‘Ferocious’.

Edward went on to say that it’s important to consider where the song will feature in a film, because it has to fit the scene.

“That’s what makes the movie, it’s the music, if you look at any good movie it has a really good soundtrack.”

John added, ‘They’re playing our song I think three times in the movie, which is really great to think that our song will be in such an iconic film.”

After confirming that they won’t be eaten by a shark (they are the only cameo performers to survive in this film), the twins then went on to talk about how Ed Sheeran tweeted about ‘Oh Hell No’, and said it was Jepic.

“It’s funny how some people in Ireland don’t know some of our songs but Ed knows all of them, so that’s amazing,” said John.

John and Edward talked about modelling for Jean-Paul Gaultier (there might be more opportunities), their recent European airport tour, and that they’re currently in the planning stages for a concert tour later in the summer.

Watch the interview here, thanks to @RusJedward!