The DVD for Sharknado 3 is now available to buy. Featuring a cameo performance by Jedward, who also feature on the cover of the UK/Ireland edition, it’s a very simple DVD with no extra features.

John and Edward wrote the title track, ‘Oh Hell No’ (which features briefly during one of the roller coaster scenes), and so receive a credit for that:

John and Edward’s cameo was only a small one, but it was very memorable: 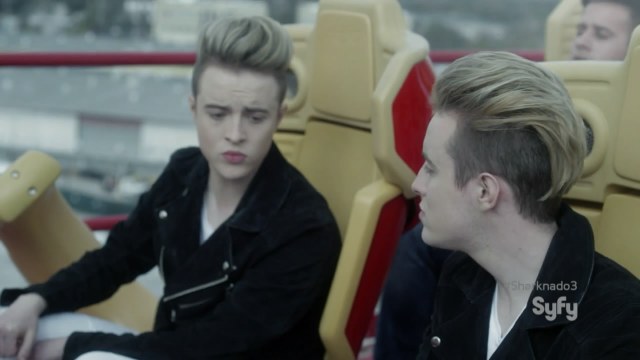 Just when you don’t think Sharknado 3 can get any more epic, JEDWARD ARE ON THE ROLLER COASTER!

Jedward have a cameo in Sharknado 3. What a wonderful world we live in

Just when you thought Chris Jericho was the highlight of Sharknado 3….Jedward turn up!

Sharknado 3: Oh Hell No! is now available from Amazon, HMV, and Zavvi.

2 Responses to Sharknado 3 DVD, Featuring Jedward on the Cover