Jedward To Play Over 18s Gig 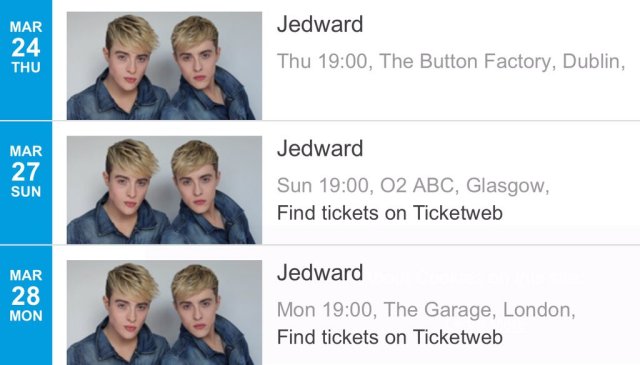 Our fans have all grown up with us and now they want a drink. We won’t be drinking ourselves but if our fans want to have a pint well we got to let them.

We know a lot of our fans won’t be able to get in but we have to cater for the older ones who can. We used to do pantos. Now we want play proper music venues like other bands.

In LA at the moment where they have been in talks with record labels, Jedward say they will perform six brand new songs at the concert, accompanied by guitar. This is another change for the duo, who have previously performed accompanied by backing tracks.

The Irish twins, who are believed to be in the running to represent the UK at this year’s Eurovision Song Contest in Stockholm, Sweden, will be performing at Dublin’s Button Factory on March 24. They will also perform at The O2 Academy 2 in Glasgow on 27 March, and The Garage, London, on March 28. For further details see Ticketmaster.

The shortlist for the UK’s Eurovision entry will be announced on Ken Bruce’s Radio 2 show this Monday, February 22, with the winner selected by public vote on Friday 26 February.