Seven Years Of Jedward: We Chronicle the Duo’s Career In Song

The 22nd of August 2016 marks 7 years since the 6th series of X Factor first screened on UK and Irish TV. With it came several young hopefuls who’ve gone on to become household names in one way or another, including Olly Murs, Stacey Solomon, and Joe McElderry, who went on to win the series. Possibly the most controversial were Dublin twins, John and Edward Grimes, better known nowadays as Jedward, whose impact was possibly far more reaching than anyone at the time anticipated.

The pair fought against the odds, including a national hate campaign, and finished in 6th place in the finals. They were taken on by Louis Walsh, who didn’t reckon on their determination and strength of character. John famously replied to Dannii Minogue’s question at their X Factor audition of, “where do you see yourself in 5 years’ time?” with “I see myself as being older”. Now seven years on we see they’re not just older, but have achieved more than most would hope in a lifetime. Here’s just some of the highlights, with each year denoted by one of the duo’s self-written songs, which they started releasing in 2014.

Walsh never intended for the Dublin twins to reach fame beyond Ireland and the UK, but the pair had other ideas. Speaking at Summer in the City last weekend, John spoke of how they started their YouTube channel, JedwardTV back in 2010, and it took them to the world.

“We were only ever meant to be in Ireland, and now we’re in all these different countries, because we used to make our own YouTube videos, then we’d do like reply sessions, and share the video, and then before you know it, you’re in Singapore doing a meet and greet for like 2000 girls who are buying your albums because they’ve seen your videos on YouTube, and that’s amazing.” – ‘Jedward Interview Summer in the City’, Red Carpet News TV

The twins have made something in the vicinity of 500 videos for the channel, and although they have recently been concentrating more on their VEVO channel the videos are still widely watched.

2011
2011 was the year Jedward hit the world stage with bang, when they represented Ireland at the Eurovision Song Contest, with their song, ‘Lipstick’. Europe took John and Edward into their hearts, with subsequent tours of Germany, Sweden, Finland, the UK and Ireland, cementing their place in hearts of many. 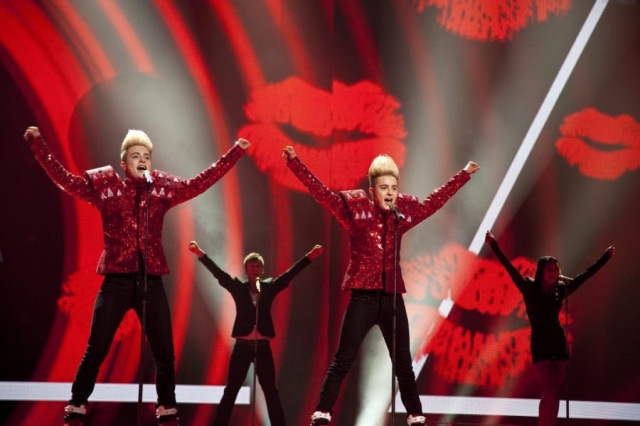 Jedward finished in 8th place on the Eurovision stage in Dusseldorf, with the competition going to Azerbaijan, and Ell and Nikki, with their song, ‘Running Scared’. John and Edward nonetheless took the Marcel Bezençon Artistic Award that year, best artist as voted on by the commentators:

Additionally John and Edward saw their fame increase when they were were selected to perform for US President Barack Obama on his state visit to Ireland. They caused quite a stir wearing their red Eurovision outfits, causing Mr Obama and his wife Michelle to go up to them first of all the assembled celebrities and dignitaries.

Other highlights included entering the Celebrity Big Brother house in August that year, which saw the ranks of at that time still primarily teenage fans swell to include many adults who admired their tenacity and fast wit. There they met Tara Reid, who was to become a firm friend of the twins, and who opened many doors for them into the US. They also filmed the first of three series of their CBBC programme, ‘Jedward’s Big Adventure‘, which saw them lead tour groups of children around UNESCO World Heritage sites across the UK. The programme is still a firm favourite on the Children’s TV channel.

2012
John and Edward ferociously took on Europe a second time, returning to the Eurovision Song Contest for Ireland with their song, ‘Waterline’, in Azerbaijan’s capital, Baku. Although the contest this year was ultimately taken out by Sweden’s Loreen, and her song, ‘Euphoria’, the pair nonetheless made as much an impact this time as they had the previous year, with their place being firmly woven into the fabric of Eurovision’s history.
2012 saw John and Edward chosen to run with the Olympic torch in their home town of Ireland, on its way to London. The pair had already completed the LA Marathon earlier that year, the pair competing on a whim. Given that prior to their X Factor days they had been national class long distance runners, and had kept up their fitness along the way, it wasn’t quite such a difficult task as one might think. 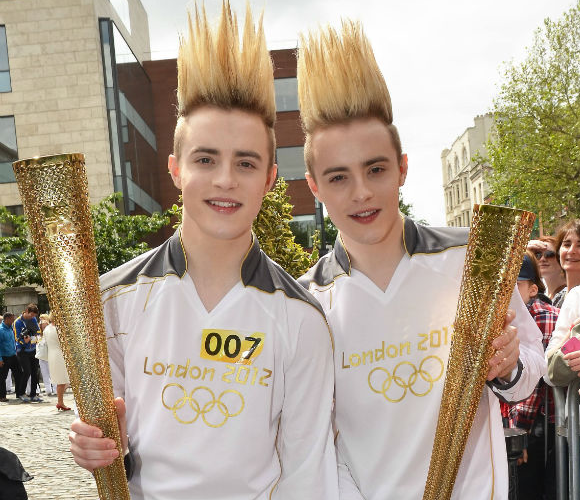 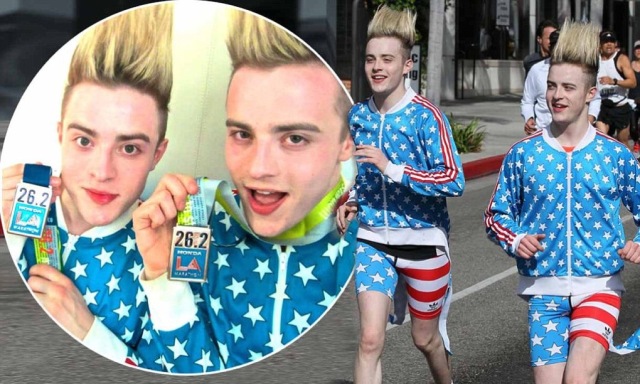 2013
In October 2012 John and Edward celebrated their 21st birthday, marking a seachange in their lives. Their contracts with both Universal Music Ireland and Louis Walsh came to an end, but rather than calling it a day, the pair were even more determined to succeed. They visited Canada and Australia a number of times, and the end of the year saw the pair tour both the UK and Australia, capitalising on their Eurovision fame. The pair performed in classic venues downunder, including Sydney’s famous Enmore Theatre, which had played host to The Rolling Stones only some weeks before.
Their friendship with Tara Reid continued to bear fruit, and the pair met and befriended singer songwriter Ed Sheeran, catching up with him several times during the year, including at Canada’s Much Music Awards, where “Jedsheeran” became a thing. The trio discovered they had much in common beyond being of similar age and experience, and quite enjoyed each others’ company.

Jedward were also asked to perform at a benefit concert to raise funds for Christy Dignam, the lead singer of classic Irish rock band, Aslan. The concert featured the greats of Irish music, with each act performing an Aslan song:

It was during 2013 that Jedward announced they had been writing songs for their fourth album, their first to be released as independent artists.

2014
Jedward were now showing the world who they were, free spirits for whom no barriers could stop. On Easter Sunday that year they premiered their first self-written song, ‘Free Spirit’, to a sold out audience at Dublin’s Olympia Theatre. It was a time of new beginnings for the twins, with the song being featured by Graham Norton on his BBC Radio 2 programme. The video, shot in both Ireland and Rome, was released in July that year. Their next song, ‘Ferocious’, debuted in October with a video featuring Tara Reid. The song peaked at number 15 on the Irish Singles Charts, the highest the duo had reached in their home country since 2010. It had entered at number 20, with a higher entry than U2 and Taylor Swift, who had released songs the same week, and were the highest Irish act on that particular chart. 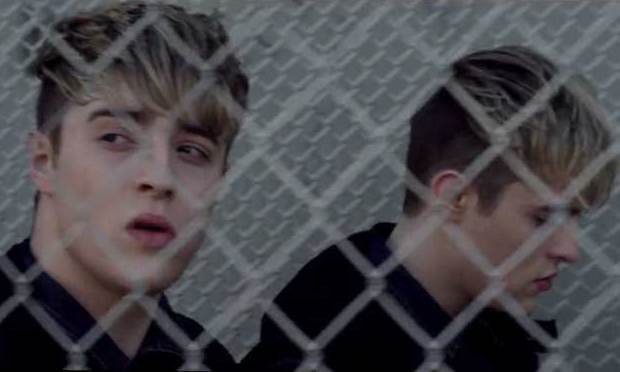 Later that year the pair had concerts in Ireland in October, featuring a special “soundcheck” package, which essentially saw them perform two concerts a night – the first one including a question and answer session. At Christmas they had another first, with their “VIP Intimate” trio of concerts, performing for fans after having first had a meet and greet of the Jedward kind. Jedward fans are fiercely loyal, and the close bond between them and the twins means that meetings are more that of old friends rather than between artist and fans. It was at these concerts that the announcement was made that it would be a while until fans saw John and Edward again.

2015
John and Edward spent a good part of 2015 in Los Angeles, where they expanded their CV to include acting, after they cameoed in ‘Sharknado 3’, alongside Tara Reid. Although they were only in the film for a few seconds, it was enough to mark their entry into the conscious of the US, with many comments about “who were those twins on the roller coaster”. The beginning of the year saw the release of the song, ‘Make Your Own Luck’, the video featuring celebrity blogger Perez Hilton, Comedian Margaret Cho, and the notorious “Stalker” Sarah.

It was a bumper year for singles, with Jedward releasing ‘Oh Hell No’, which featured in Sharknado 3, as well as being the title track for the film, and also ‘Leave A Mark’, a song about making an impact on the world. Although they spent nearly 8 months altogether in the US, European fans weren’t left out, as the twins embarked on yet another unique event, a whistle-stop tour of European airports, just to meet up with whoever turned up. They took in 17 different cities over 10 days, starting in Copenhagen, Denmark, and finishing in Tallinn, Estonia. They visited a total of 13 different countries, including several, like Poland, that they’d not visited before.
While in Berlin, Jedward and fans had the opportunity to sing for HRH Queen Elizabeth:

In May John and Edward had the opportunity to model for Jean-Paul Gaultier at The Life Ball in Vienna, Austria, as part of that country hosting the Eurovision Song Contest: 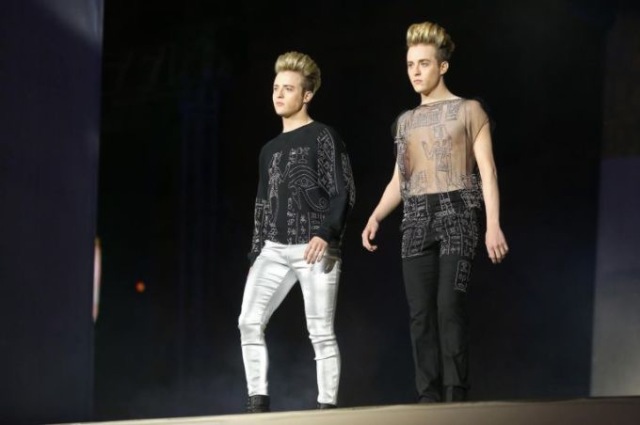 2015 also saw John and Edward appear on several game shows, including ‘Get Your Act Together’ for ITV, where they learned to skip double-dutch.

2016
What lies ahead for Jedward? This year the pair have continued to release songs, and slowly but steadily making inroads into popular culture in a way so as to ensure they are never uprooted. They featured in ‘Sharknado 4’, this time as “Astro Techs”:

The pair repeated their “Jedhug” tour in January, this time calling it the World Peace Tour, in light of events in recent weeks in Belgium and other countries. Fans came from all over to see the duo, who hugged and chatted their way across Europe, this time taking in an ambitious 19 stops over 7 days, meaning up to 3 cities in one day in some cases: 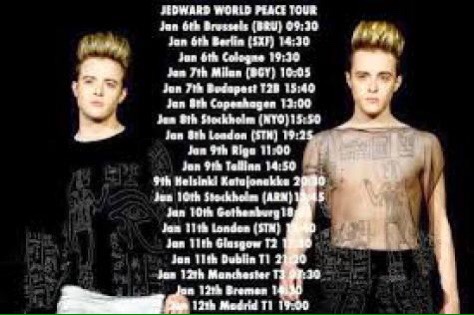 Good Vibes’, released in March on St Patrick’s Day, has been viewed over 1 million times and with the count still continuing to climb. They had a series of four concerts over Easter, taking in Dublin, Cork, Glasgow and London. The pair performed in historic venues including The Button Factory in Dublin, and The Garage, London.

More recently, John and Edward have released ‘The HOPE Song’, with a video almost scene by scene recreating the video for Justin Timberlake’s ‘Can’t Stop The Feeling’. It’s a song which typifies the duo: they dare to dream and see those dreams fulfilled. They can’t stop and they won’t stop. Just last weekend they were guests as part of the Summer in the City YouTube convention, and in addition to their official meet and greet, which had to be extended by one and a half hours, the pair also held an unofficial meet and greet, talking to and having fun with fans for nearly 8 hours – close to – if not over – 1000 fans met over the course of three days.

If there’s one thing to be said about Jedward, it’s that they’re full of surprises – it seems they aren’t slowing down by any means, and we’re excited about what they have in store. Onwards and upwards John and Edward! Thank you for seven glorious years so far – and here’s to many many more!